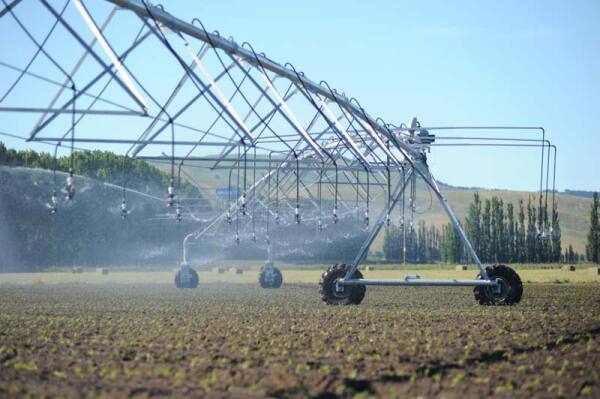 Sprinkler design has improved significantly since the early days of center pivot sprinkler systems. In the beginning, center pivots used impact sprinklers from solid set systems simply because they were the only sprinklers available. Impact sprinklers operated at very high pressures — 60 to 100 PSI — and their efficiency was relatively low because much of the irrigation water was lost to wind drift and evaporation. However, the large coverage diameter achieved by impact sprinklers helped to reduce soil sealing and runoff on fields with heavy soils and rolling terrain.

During the energy crisis of the late 1970s, farmers began looking for ways to reduce pumping costs for their sprinkler systems. In response, sprinkler companies produced new types of irrigation sprinklers designed specifically for center pivot systems. The first new irrigation sprinkler was called a spray nozzle. It operated at 6-30 PSI (0.41-2.04 bar). The lower water pressure of spray nozzles could decrease the cost of pumping irrigation water for a center pivot by more than 50%. The low-pressure spray nozzle also improved application efficiency by reducing water losses to wind drift and evaporation so that more water could get into the soil for crops to use. However, the smaller coverage diameter of spray nozzles also could reduce application efficiency because of soil sealing and runoff on fields with heavy soils and rolling terrain.

Considerable engineering and design effort went into creating distribution plates for specific soil types. For example, deep-grooved plates that generate large water droplets are commonly used on light soils and flat fields. Shallow-grooved plates that generate small to medium-sized water droplets are used on heavy soils and fields with rolling terrain. Plates with multiple trajectories have been created to widen the coverage diameter of rotating sprays and reduce runoff. In addition, special hardware called booms increase the coverage diameter of spray nozzles, further reducing runoff. In recent years rotating plates have been designed for use with specific crop types, such as field corn, potatoes and alfalfa, fine-tuning the performance of irrigation sprinklers to meet the needs of specific crops.

Ongoing design changes in center pivot irrigation sprinklers have made it possible for today’s growers to do more with less water. When you are selecting a sprinkler for your irrigation system, always take into consideration soil types, field elevations and crops. For help in making a good decision for your sprinkler system, contact your local Valley dealer.