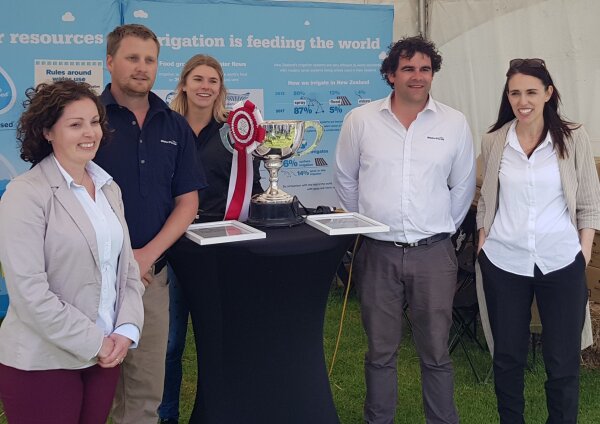 A couple of weeks ago at the Hawkes Bay Royal A&P Show, IrrigationNZ together with Waterforce were pleased to win the award for best overall trade stall exhibit.

We were also visited by PM Jacinda Ardern who earlier that day had announced that government and the agriculture industry came to an agreement where farmers could avoid to being shifted to the Emissions Trading Scheme (ETS) until 2025, if they committed to a new sector led plan.

The IrrigationNZ exhibit at the Hawkes Bay show focused on how influential irrigation was on the economy both in New Zealand and globally, and how irrigation played a significant part in getting food on the table.

IrrigationNZ  provided lucky site visitors with food from Heartland potato chips and Barkers fruit products – the ingredients for which are grown using irrigation.

IrrigationNZ CEO Elizabeth Soal said getting out and about and going to A&P Shows was a great opportunity to promote irrigation to both a rural and urban audience.

“We get to meet a range of people and help them become more knowledgeable about irrigation.”

“We were delighted to have the PM visit us as it was a good opportunity to showcase the good work irrigators are doing.”

Waterforce Hawkes Bay technical representative Brent Loader said it was great to support the community and also showcase the innovative technology that was used day to day in irrigation systems.

“We had a lot of interest from people asking what technology was being used for water and environmental management. It was great to not only answer their questions, but also show them.”