You are Here: Case Studies / General / Looking for improved performance or flexibility from your existing machine

Looking for improved performance or flexibility from your existing machine 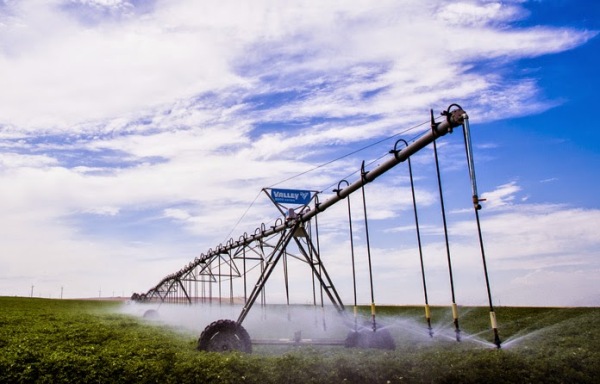 Farmers and their staff are too busy to waste precious time tending to their irrigation system – fortunately irrigation technology has come a long way.

North Otago farmer Merv McCabe runs a busy agricultural contracting business and was frustrated by the time it took to manually shift his 14 year-old Otech Linear Irrigator each day.

“To water 48ha it usually involved three or four visits to shift the drag hose and turn it around. I was always at it. And if there was a shower of rain it would often skid out of alignment. I’d come home and find it was only half way down the paddock when it should have been finished. It would take half an hour to physically walk it backwards, get it straight, and set it going again.”

So when he purchased some additional land adjacent to his existing irrigated block in 2015 he approached WaterForce for help.

WaterForce visited the site and suggested Merv convert his existing linear machine into a centre pivot irrigator and add two new Valley spans and a Valley Corner Arm to gain additional area on the newly-purchased land.

“There was absolutely nothing wrong with the steel work I owned,” Merv explains. “It was the operation of the machine and the electronics that were letting it down. The other problem was Otech is no longer supported in New Zealand so if I needed any new parts or had any trouble it was like pulling teeth.”

The entire conversion was completed in a very tidy manner in just a few days. Merv says the irrigator also benefited from converting to a full Valley alignment and having a Pro2 control panel installed – but it doesn’t look like a ‘Frankenstein’. “It looks like a brand new machine. You can’t tell it’s been retro-fitted.”

If any of the existing spans require replacement in future, new Valley spans will simply fit straight in.

“The whole project was very straight-forward and simple. I’d have no hesitation in doing it again.”

Merv can now irrigate just over 70ha at the touch of a button and for a fraction of the cost of buying a new machine, with significant labour savings as an added bonus.

“The only downfall is this year I haven’t had to turn it on much because it won’t stop raining!”

Retro-fitting old irrigators is becoming an increasingly popular and viable option. WaterForce is able to utilise existing Valley hardware on a wide range of competing machines to improve the reliability of your system. Retro-fitting also gives you surety of support from our extensive branch network and the ability to adapt to new technology as it is introduced.

So if you have a competing brand pivot or even an older Valley sitting in your paddock that you think is well past its use-by date, think again!

If you’d like WaterForce to evaluate your existing irrigation system, get in touch today.