You are Here: Industry News / General / Is your pump shed looking after your equipment?

Is your pump shed looking after your equipment?

As time has moved on the pump sheds have improved also. However, recently industry discussions have focused around improving the other areas of your irrigation system but 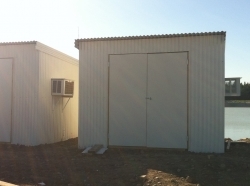 WaterForce and the mid Canterbury electrical partners (Burtons Electrical) have been trying to house your irrigation equipment in an environment suitable for the products we are now supplying to give you the best possible chance at a long life and trouble free system (variable speed drives have a life expectancy of 10 years!). Burtons have noticed over the past few years a spike in the number of variable speed drive installations, and as such have also noted the amount of service jobs occurring in the heat of the season due to nuisance problems also increased. One area that Burtons and WaterForce have worked together to improve their systems is to look at the shed environment - we needed to reduce the open ventilation area (mesh, slats etc) and improve the air circulation around the variable speed drives and motors. All variable speeds and motors use the air in the shed to cool themselves and in hot summer temperatures require a lot of air movement to keep them cool.

Many options were considered with a major concern being the increased cost to the end user. Together we have settled on the installation of an LG heat pump combined with sealing and batting of the pump sheds whilst also trying to keep the sheds a light colour to reflect heat. The cost on new schemes is approx. $3,000 per pump shed for the 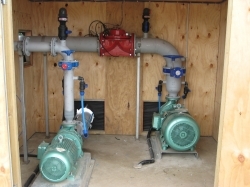 lining of the shed, bats, and the air conditioner installed - this system offers reduced rodent problems (chewing of wires, nesting in cabinets) reduced bird issues (nesting behind drives is a major reason for drive failure and nuisance call outs and increased fire risk), minimizes dust (it is common to leave the door open to pump sheds due to the heat this is now removed) removes moisture build up inside the shed (common on unlined shed roofs causing moisture to drip into fans causing fan failure).  Although the heat pump will need off season servicing- we recommend once a season it is a cost effective unit with easy service access and can often be protection equipment 50 times its value so a service annually at around $500 if the unit is in a pump shed with over $100,000 of equipment is well worthwhile and a lot more cost effective than in season breakdowns which can often cost a lot more in lost production and frustration.

Call 0800 4 FORCE to discuss off season options for your pump and electrical sheds.