You are Here: Case Studies / General / How much time does your irrigation system soak up?

How much time does your irrigation system soak up? 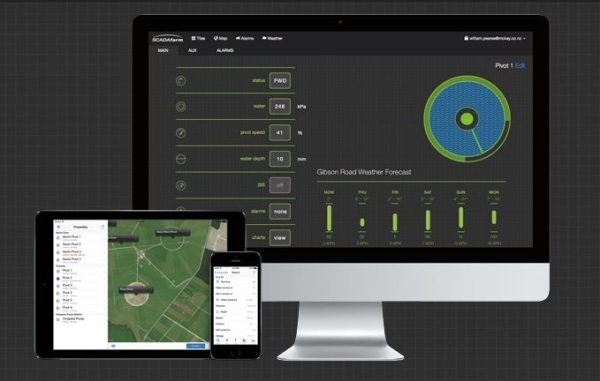 How many hours the water is on (or off, if his pumps unexpectedly cut out), can have a dramatic effect on the growth of his crops and consequently his bottom line.

“Those hours all add up in the growing season,” he explains. But thanks to WaterForce’s leading SCADAfarm technology, he is more in control of those hours than ever before.

“It has really lessened the down-time during our irrigation season and we’ve been able to stretch our water further. Last year, when it was very dry and our well water levels were down, you could really see the benefits of it.”

Best of all, Adam’s decision to install six pivots on his 296ha property and control them all remotely using SCADAfarm, has saved him up to five hours of work each day in summer – time which he previously spent shifting travelling irrigators and checking everything was running as it should.

Now he simply uses the SCADAfarm app on his smartphone to control his irrigation system in real time. He can turn water on and off, set each pivot’s speed and direction, check water pressure, change the watering depth and much more – all at the touch of a button.

He also receives an immediate alarm notification if his pivots or pumps stop working for any reason – allowing him to rectify the problem and get water back on as soon as possible.

“We don’t have enough water to run all six pivots at once so it’s quite a balancing act to decide what water goes where.

“It’s also handy to be able to keep an eye on things – knowing each pivot is still going without having to physically be there to see it.”

SCADA stands for ‘Supervisory Control and Data Acquisition’ and is an automated system used extensively by the international mining, petrochemical, water and wastewater industries.

Developed specifically for New Zealand farmers, SCADAfarm is supported by the technical expertise of global automation management specialist, Schneider Electric, and telecommunications experts, Vodafone. These two companies have partnered with WaterForce to provide unrivalled control and peace of mind for Kiwi farmers across all farming sectors.

Adam admits he was nervous about whether SCADAfarm would work on his property because cellphone coverage is extremely poor.

“WaterForce spent a lot of time testing and working out where to position aerials to pick up the best signal. It was surprising what they could come up with. The system certainly works in an area where the signal’s not strong at all.”

He’s also impressed by how easy the SCADAfarm app has been to use and understand. “The SCADAfarm platform is basically a replica of the controls at the base of each pivot. So you need to know your machines, but you don’t need to be a computer genius to operate it by any means.”

One of the most useful functions is the ability to monitor water pressure, Adam says.

“Being able to monitor water pressure at each pivot lets us know how the system is running in real time and if we have any pumps out. We can detect any issues straight away and get things going again, whereas before those sort of problems used to go unnoticed for periods of time.”

Now he no longer has to spend four or five hours a day shifting and monitoring irrigation, Adam has more free time with his young family and can focus on getting other tasks complete.

SCADAfarm is available for an affordable annual subscription. For more information about the application’s benefits and features, contact your local WaterForce Branch on 0800 436 723 or email the dedicated SCADAfarm team at [email protected]