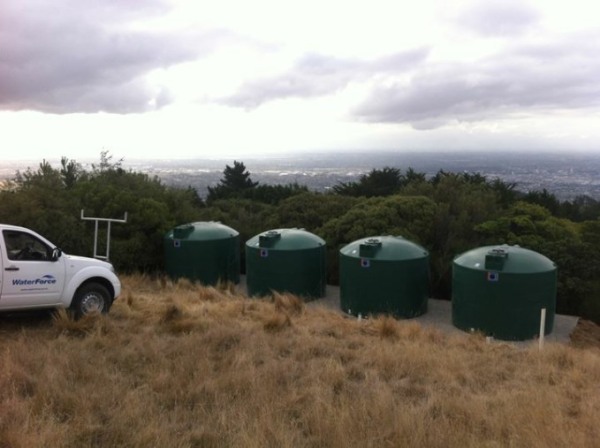 Canterbury’s Port Hills provided some unique challenges for WaterForce who were asked to supply and install four large water tanks on its steep slopes overlooking Christchurch.

The 25,000 litre tanks were required to provide extra storage for the city’s Victoria Park water supply, as well as emergency storage in case of fire on the Port Hills. The tanks would also supply the Sign of the Kiwi Café and the ranger’s house at Dyers Pass.

However, the Port Hills volcanic rock at the Sugarloaf Reserve site made it impossible to dig a level base for the tanks. To make a suitable pad, WaterForce began by excavating a 19m x 5m area and then built up a base with 48m3 of crusher dust. The extra material was brought in part-way by truck and then relayed to the site using a digger.

The difficult site access meant a helicopter was then needed to lift all four tanks into place. 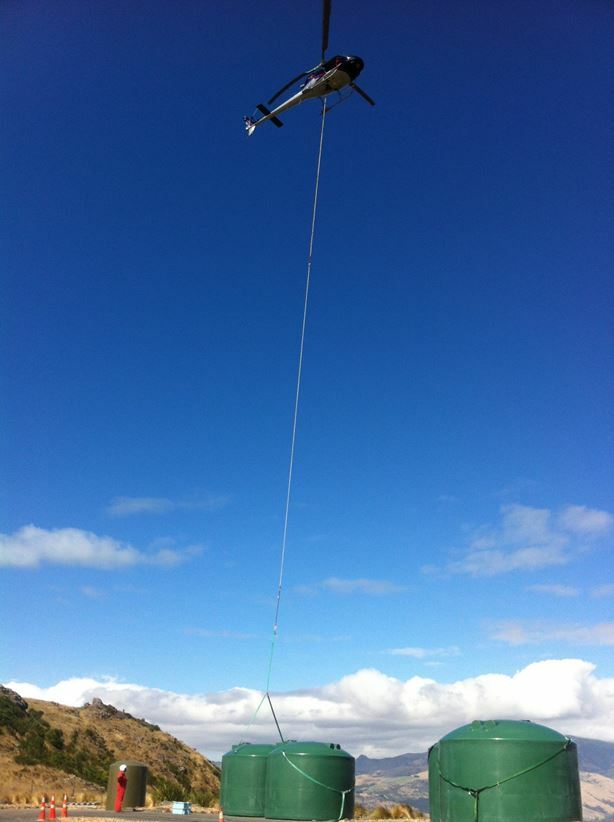 With help from Christchurch City Council rangers, WaterForce arranged to have the tanks delivered to a nearby car park where the airlift operation began. Gale force winds caused an initial delay, but once the winds had eased the carpark and Summit Road were closed for public safety. The whole operation took about 20 minutes to lift the tanks approximately 1km from the car park to their final position on the pad.

Thanks to the skill and precision of the pilot from Garden City Helicopters, they were placed exactly on point and didn’t need to be repositioned any further.

WaterForce were also contracted to install a new multistage pump at the bottom of Victoria Park to pump water to the new tanks. The pump is controlled by a probe in the first tank which sends a wireless signal when the tank water falls to a pre-determined level.

Despite the challenges involved, the whole project was completed within budget and on schedule.