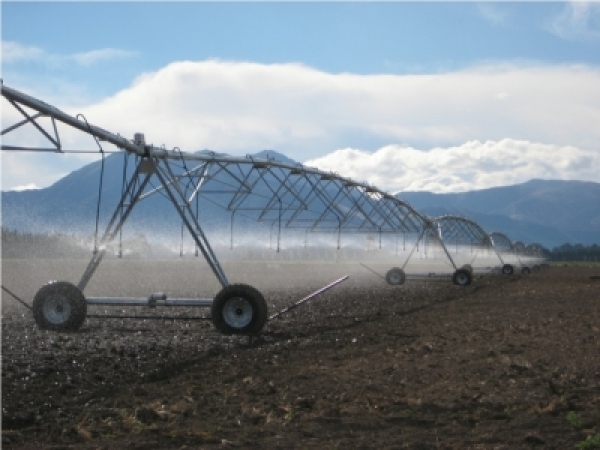 Crenlea Ltd and their consultants (McFarlane Group) worked with WaterForce to create a farm layout design where the trace of irrigation applications and nutrient management were key, while still maintaining a manageable farm operation.  The Lismore soils on the Crenlea farm have a low water holding capacity so for this block it was important to maximise the water to get the most out of the 5mm/day application in a soil which has a PAW of typically 40mm or less.

Crenlea - Mid CanterburyThe general farm layout consisted of 262ha of flat land with a lot of tree lines and existing border dykes, WaterForce worked closely with the team at Crenlea to retain as much of the shelter lines and character of the farm as possible while allowing the best farm and stock layout possible.  With a cultivation date of January 2011 WaterForce worked closely with other on site contractors to allow for the full farm development to occur from November 1 and be ready for cultivation by late January 2011. Colman Ag were the field contractors who used the WaterForce plans to cultivate diagonally across future paddock layouts to create a level seed bed before drilling to the GPS layouts for the farm, the early cultivation date allowed the newly cultivated ground to be irrigated directly behind the seeder.

The irrigation scheme consists of two Valley Centre Pivots, a Precision Corner Arm as well as Irripod multi- and single-pod lines.  The system rotation times and application equipment were analysed to minimise the risk of excessive drainage which is often present in these areas.  The two centre pivots achieve this with the ability of the larger full circle machine to operate in 31 hours per pass and the small machine to operate 20 hours per pass.  The irripod lines take into consideration the fencing plan and it was decided that the wider spacing for larger sprinklers on the irripod being moved twice a day would give a better application rate and allow better growth in the corner pasture over other equipment.

Wheel Rutting was also an important consideration to the client, especially initially with the farm being fully cultivated.  WaterForce installed Turf tires on the centre pivots to reduce the disturbance the wheels create and also specified Senninger Boombacks to give a bigger wetted footprint around the wheels giving the soil more time to absorb the water.  I-wobb sprinklers were installed on both pivots, the droplet application of these sprinklers is ideal for newly cultivated soil as the droplet is very low impact causing minimal seed bed disturbance, and also lowering the chance of water being lost in the summer winds (the photo below is showing 80km/hr winds).

As an effluent solution an EcoPump system is to be installed, drawing from a two pond separation system with the ability to distribute the effluent as a diluted fluid through either centre pivot or as a direct application via Irripod effluent pods.  The EcoPump is installed beside the storage pond on a solid pad without the need for a shed and electrical controls, the unique pumping technology used in the EcoPump delivers improved system performance and reduced power costs, and has been designed to future proof the farm effluent system to ensure compliance with local regulations.Crenlea - Mid Canterbury

A fertigation unit is due to be installed in early 2011 in conjunction with Ravensdown to compliment the centre pivot.  The system has been set up with chemigation check valves (ECAN approved back flow prevention devices), fertigation feed pipes and tank sites to suit the overall farm layout.  This also adds to the ease of farm management by allowing the application of Ravensdowns Flow Fert N and ECO products through the centre pivot irrigators at a slow application during germination (1 unit/ha) or high applications (20units/ ha) as the pasture develops to maximise the feed budget pre the cows arriving on farm.