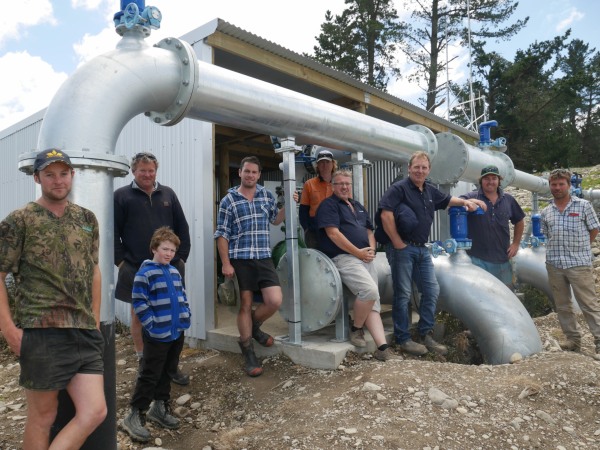 Farming with water is a lot less stressful than farming without it, so Craig Blackburn jumped at the chance to join the Central Plains Water Scheme in 2013.

Blackhills Station, a 400ha beef and cropping farm, sits on the northern bank of the Rakaia River. But with two steep terraces and 130m of elevation between the CPW canal and the farm’s paddocks, an enormous task lay before him.

Paul Donaldson from WaterForce met Craig and his business partner early on, and they were impressed with his technical knowledge and willingness to examine all possibilities without any financial commitment. After two years of background research, WaterForce won the subsequent tender and work began.

“We got on very well together and I liked the fact WaterForce is in it for the long-haul,” Craig explains. “They’re developing and adding more and more technology all the time.

“They also had good back-up support. In situations like that wind in 2013 when a lot of irrigators crashed, you look at the size of WaterForce and know they have the horsepower to cope with those scenarios.”

Blackhills decided to join with two neighbouring farms and have a joint uptake from the canal and share trenches for the pipelines. They would feed a large pond on each property, requiring a pumping system capable of operating at 550lps at a head of around 160m.

The system demanded a host of automation (as Craig lives off-site) but also immense flexibility, as the river flow monitoring from CPW required the uptake flow rates to be adjusted almost daily.

“I didn’t want to be going out to the pump shed to turn pumps on or off every day. I wanted something I could control from my phone,” Craig recalls. “And with CPW we have to order water at 5pm for the following day so we need to remotely monitor and control every aspect.”

WaterForce’s SCADAFarm along with Variable Rate Irrigation (VRI) technology was installed on all Valley pivots. But custom telemetry also had to be devised – something which took a great deal of time and effort.

“What they have achieved is pretty fantastic. The entire project was a challenge and to Paul’s credit he took it all in his stride. Now they’ve done the R&D and written the software, it will benefit their other clients too. It’s pretty advanced technology.”

The entire system has been designed to run as efficiently as possible to keep operating costs down. Pumps switch themselves on and off at night (using night rate power) and each farm can monitor and control how much water is coming in and out of their particular pond.

The first stage of the system was commissioned in late 2015 and 12 pivots are now operating across two of the farms. A further three pivots will eventually be installed with a total of 800kW of pumping power.

Craig says Blackhills’ crop yields have already increased significantly. This year 25 tonnes/ha of fodder beet has been produced (compared to 17 tonne/ha without water the year before). And Barley is now growing at 7-10 tonnes/ha (compared to 4-6 tonnes/ha).

“The biggest difference is we can now work with confidence. We can sign contracts with freezing works and know we can get stock there, and with the cropping side of the business we can know within reason we’re able to supply a certain volume.”

Looking back, Craig says the investment was well worth it. “It’s a lot of money but you never hear anyone say they wish they hadn’t put water on.