You are Here: Industry News / General / A Trip Down Under

A Trip Down Under

Article from a blog by Valley Irrigation:  growingtheconversation.blogspot.com 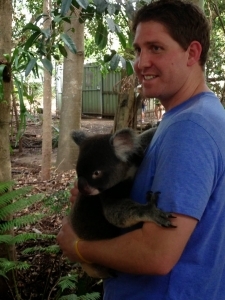 So one of the “perks” of my job is I travel. A lot. There have been many times when that travel has been challenging. Just the other day I was stuck in an airport while it was shut down because of tornadoes and other weather. I can assure you that utter chaos followed for the next 5 hours, but that is a story for another time. That being said, a majority of my travel is quite enjoyable.

A few weeks ago, I got the chance to travel down under to Australia and New Zealand. I consider this a great perk – not many people get the opportunity to take a trip down under. I also question whether it was a perk because anytime you take a 15-hour plane ride with your boss you question if your career is headed in the right direction! Despite the length, I was surprised at how comfortable I actually was on my flight there and back. Thank you Delta for making it a great flight! Airplane food is not all that bad.

We first flew into Christchurch, New Zealand, and it took about 24 hours of total travel time to get there. Needless to say, I was exhausted. After recovering, I spent the next few days with a couple of our dealers in New Zealand. What a wonderful bunch of people. I must say, I learned quickly that a Flat White (coffee) is amazing and you don’t mess around with a man’s afternoon tea or coffee!

While in New Zealand, the first thing I wanted to do was look for Frodo from the “Lord of the Rings.” Obviously, the boss said that wasn’t in the cards.

New Zealand really is a beautiful country. Coming from central Nebraska, I am used to corn, soybeans, and pastures. In New Zealand, there are dairies. And tons of them! They are somewhere near the top, if not the top, dairy producing country in the world. Pretty good for an island country of its size.

I was simply amazed at the innovation they use to water pastures, keeping them in tiptop shape for the cattle, and at the environments the dairy cattle live in. Let’s just say that they have it pretty good over there.

One of the main reasons I was down there was to see how they use of Variable Rate Irrigation (VRI). They actually use VRI to split a pasture into paddocks that are rotated for the cattle. I thought this was pure genius because it is so efficient. It allows them to turn water off over cattle walking path,s as well as keep any runoff to a minimum. Just some of the great things that New Zealand is doing.

Here is an image showing the paddocks: 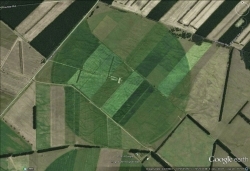 One thing I learned quickly in these two countries is that there are a ton of roundabouts and not as many stop signs as we have here in the United States. They also have a lot of “yield of ways,” which means approach the intersection cautiously and stop if necessary, otherwise go on through. I can tell you, I got used to this and even tried to incorporate it here in the States. Unfortunately, a local sheriff warned me of the consequences of that particular practice…

After a few days in New Zealand, we caught a flight to Brisbane, Australia. I always thought these two islands were just a hop, skip, and a jump apart. I was wrong. It was a 3-hour plus flight. After the flight, we drove a few hours to meet with some more dealers.

I was impressed with the names: Toowoomba, Goondiwindi. I am not quite sure if we were in the Outback, but I tell everyone I was! I was also amazed at the contrast between New Zealand and Australia. Australia was more like a desert than New Zealand, although they seem so close together. And to my surprise, I was able to see numerous kangaroos! This was truly a great place.

I was even more surprised by the incredible innovations of the people in these two island countries. I was there looking at irrigation machines and how the growers make them work for their different situations. The engineering and creativeness they came up with was spectacular.

Overall, I would say this was a job perk. An opportunity to visit our devoted Valley customers and dealers, and seeing the differences in the irrigation business and the agriculture problems they encounter. I am still amazed at how awesome all of the people that I met were. I look forward to the day I get to return and spend some more time. I suppose if I have to go with my boss again, I will let him tag along…